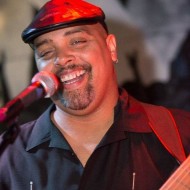 Two Chicks And A Stick -The Chicken

John Cardoso was born in Portugal, raised in California, and is currently residing in New York. Johnís passion for music and love of performance has earned him the reputation as a one-take wonder, a praise for which he is humbly thankful. Influenced by the ever-evolving world of music, and expertise gained by working with different cultures, John continuously inspires the listening ear with his unadulterated talent and addiction to an in-the-pocket rhythm, which always raises a brow or two.

At the age of twelve, John toured the west coast with a local band, setting the course for fast-paced musical career. By the age of fourteen his talents were sought after for studio work within the Portuguese circuit, and drummed on his first 45-vinyl entitled Lusolandia, which spun internationally. Several years later, John gained employment at Yamaha School of Music teaching, as well as performing clinics, at drum festivals and schools in central California. In 1991, John graduated from Grove School of Music and let loose on the Los Angeles music scene, touring, recording, and performing. As a hired-gun, John performed with several notable artists.

For more information about John, please visit his website. JohnCardoso.com

New York Is My Home

Let Me Talk To You Baby

With the Ally Stone Project